Never be afraid to tell your story because there’s somebody who needs to hear it.

I have to keep telling myself that. I get those little twangs inside, telling me to just stop—that I’ve already said enough.

But, I’m not going to let fear win.

When I mentioned taking down the enemy in my last post; I was talking about sobriety, and my own spiritual battle. I wasn’t declaring war on men. I just want to make that clarification in case it wasn’t clear. Anyway, after doing some careful self-examination I started to realize something about my man pursuits. Not to sound cliché, but it wasn’t them—it was me.

After getting some male opinions, the general consensus was that—for them—it was like a hunt. Chase, conquer, pick up your trophy and go home. I’m not quoting them, but that’s what I took away from it. I mulled it over for a bit, and thought about how it compared to my own pursuits.

It was startling to discover that I followed the same pattern, in a sense, but it took MUCH longer to win the love of a man than it did for them to obtain their prize. Obviously, that was my own fault for handing out rewards far too quickly… but that’s another story.

What I discovered was that it was a sport for me as well, in a weird way. I went on long and treacherous fishing expeditions, with no REAL plans to keep what I caught. Once I’d thoroughly weighed and inspected him, I was ready to cast him back out to sea. Unless I just happened to harpoon a whopper someday, that is. 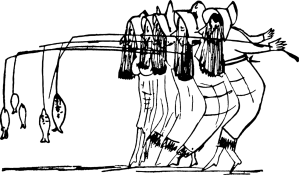 Either way, neither side was playing fair!

The bottom line was that if, or when, the love was finally reciprocated, the poor guy couldn’t possibly measure up. The thrill was soon over and I ended up having to plan my getaway. I was just chasing another high… looking to fill that void. The same void that I tried to fill with alcohol and anything else that I could get my hands on.

I never really knew WHAT I was looking for. In fact, it wasn’t until that void was finally filled that I understood that it was God that I had been searching for all of those years.

So, I guess you could say that while I was learning to embrace singleness, I discovered that God was embracing ME. The fight for recovery was suddenly easier, because I realized He had never intended for me to fight the battle alone.

Next Up: Through God’s Eyes

The eternal God is your refuge, and underneath are the everlasting arms. He will drive out your enemies before you, saying, ‘Destroy them!’ Deuteronomy 33:27