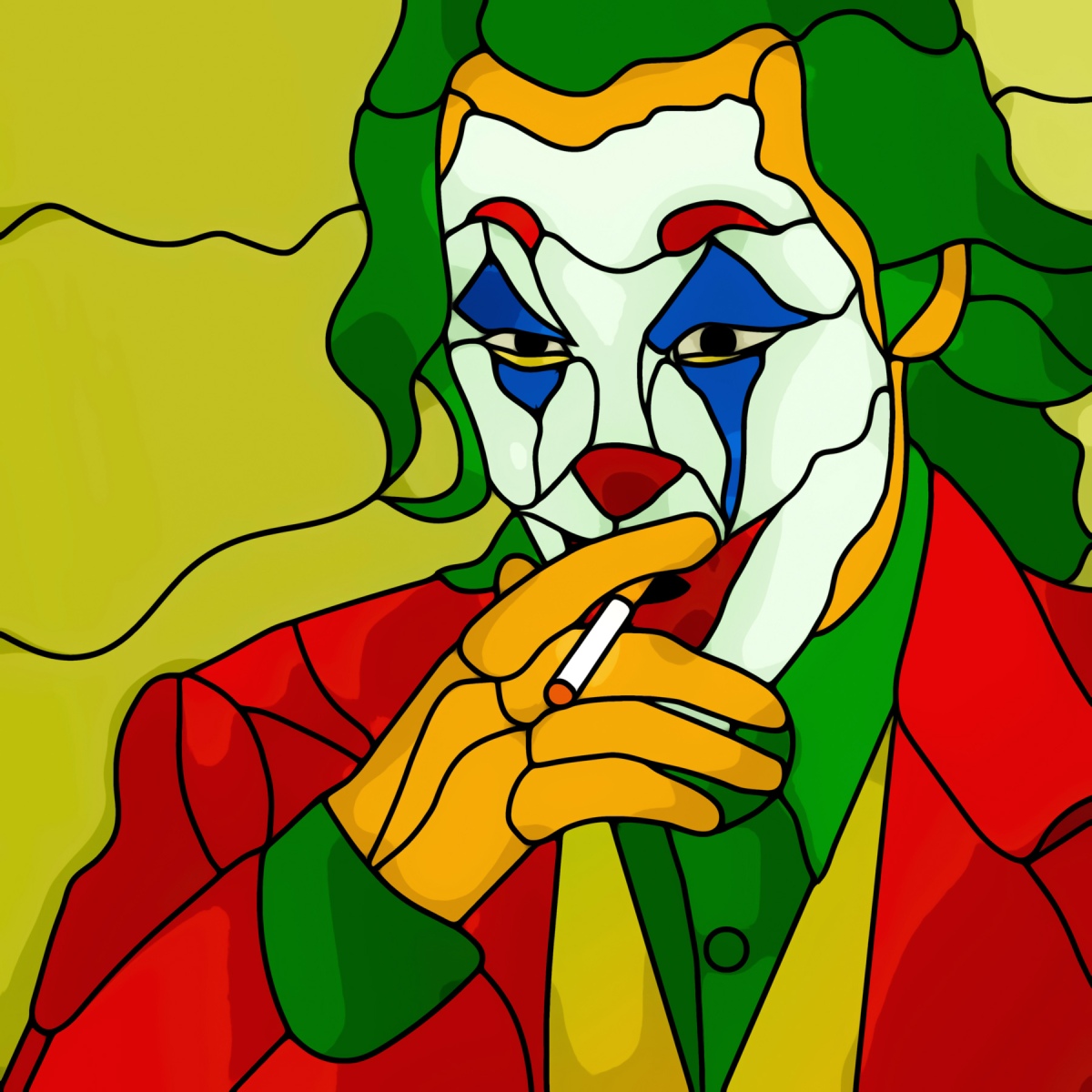 Cat dropped her recipe book and shrieked, “Aren’t you the…”

“I’m a joker, I’m a smoker, I’m a midnight toker.” He interrupted, laughing as he inhaled his cigarette. “I sure don’t want to hurt no one.”

I don’t know if you’ve noticed, but I’ve been venturing out and trying new things lately. I think it’s safe to say that my Photoshop Tips/Tutorial was a flop (haha), so I said to myself what I always say when that happens. NEXT! Actually, I think I might try doing more in the future, but not on this blog. We’ll see.

So, I’ve been wanting to get back into my “stained glass art,” but I wasn’t able to find any inspiration until today—when I stumbled on this Joker. I saw Sammi’s Weekend Writing Prompt and thought it would be fun to include him as part of the prompt. I’d have to say that I’m probably disqualified though, because most of the conversation was stolen from the Steve Miller Band. It’s all in fun anyway. And as long as I’m confessing, I have never seen a Batman movie either.

I had no idea that the Joker smoked until I saw this image of him. I thought about replacing the cigarette with something else but couldn’t think of anything and now I’m glad I didn’t because it went well with the 36 word story.

I think I’ve come to the conclusion that everything I create and post here is “practice.” If I do it long enough, maybe one of these days I might actually stumble on my own “style.” Until then, I’ll just keep experimenting and learning.

That being said, I wanted to share both versions of this piece. The featured image up top is after sending it through BeCasso for a cartoon effect, and below is the image straight out of Illustrator.

I thought maybe I could get feedback as to which one is preferred. I like the cartoon effect but I think the colors are a bit drastic. And on the original here below, the colors are muted and maybe too dull and boring? I don’t know.

One good thing about all of this experimenting is that I find easier and quicker ways to do certain things, and I’m really looking forward to some more wild stained glass art in the future. It might even be fun to try a portrait of a friend, who knows?

Anyway, I think that’s about all for now. Thanks for reading!

They laugh at me because I am different. I laugh at them because they are all the same.

The Joker (or Kurt Cobain)